Wow what a difference a year makes! It is less than a year since I had my come back cyclo cross race after 33 years away. The sport has been transformed over the years. The races are well organised and the number of racers, over so many different age categories is amazing.

My decision  to make a comeback, was some what off the cuff and to be frank I did not realise how hard it was going to be. The body complained a lot at the beginning and still is, but the more I have got into it, the keener I have become and my approach now is probably as professional and focused as it was all those year's ago.

I have made sure I have the best equipment and I am very grateful to my sponsors for their ongoing support. Dave Loughran at Planet X has been a good customer of mine and he was quick to offer me bikes, when I told him what I was planning. Additional support from Gipiemme for carbon wheel, Vittoria for Graphene tubular tyres and MRP for their magic Wave chain ring and chain guide, has made sure I am  perfectly equipped.

With only 8 weeks until the big race, my focus is greater now than ever. Liam Killeen has been brilliant with his coaching and being able to train with him several times a week, has been both an inspiration and great experience.

Since my second in the first race, I felt I plateaued some what over the next couple of weeks. In Coventry Steve knight won again and I let Glenn Coltman and Kirby Bennett get the better of me on the last lap to come 4th in the over 50's. A week later I came in 5th in a race in Henley in Arden in which I perhaps should not have started. I had a bad eye infection in the days before the race and couldn't wear my contact lenses and this proved a bad distraction. I had to wear ski goggles over my glasses, which sort of worked, but I had to throw them off half way round when they steamed up! A week later I felt in better form in Shrewsbury . I was determined to get on Steve Knight's wheel at the start, which I did and was with Steve and Kirby Bennett for the first 2 laps, before I slipped my chain and lost contact with them. I did fight back though and catch Kirby who punctured, so a 2nd place felt much better.

Training has become very intense and although the racing at the weekend is important (it is the first national trophy race tomorrow in Derby), ultimately all the raining is geared round peaking for 30th November.

Liam, has given me some good advice on nutrition and although I have already lost 10 kgs in a year, I am trying to lose a couple more , but at the same time maintaining my strength and energy levels for the training.

I am now enjoying the journey and a year on beginning to see the results. Tomorrow will be my first race against the best 60+ riders in the UK, so this will be a good measure of where I am in my preparation. Fingers crossed...! 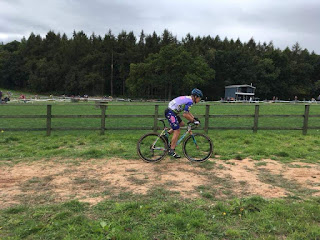 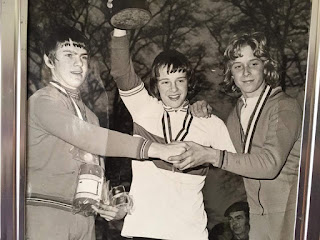 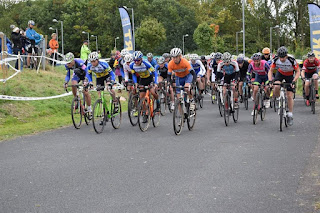 The start at Shrewsbury 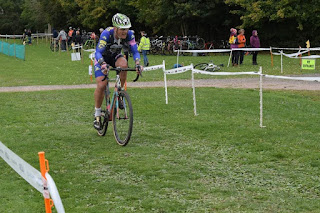 Felt strong and finished second in over 50's at Shrewsbury
Posted by Chris W at 10:23