I am gradually getting into the training routine and as my fitness improves, I have been getting a buzz at seeing my weight fall, energy levels rise and fitness improve.

Looking back though I realise now how unscientific my approach was in the late 1970's and early 80's  to both training, racing and nutrition. I had a coach and mentor in the Uk, Mick Shakespeare and a coach in Switzerland, Fritz Schaerer and for that period, bearing in mind the facilities available I was probably ahead of the competition in my  approach to my training, with a plan to peak at right time etc but when you see how the top riders and teams operate now, we were dinosaurs. Even when I joined Bianchi Piaggio, as a pro (Bianchi were recognised as one of the top teams in Europe)  their approach to training, was very 'old school' . Early season races, were seen as the best training for more important races later on. Diet and nutrition too were archaic.

As I have now just under a year to realise my goals, I mean to take advantage of everything that the modern world, can offer me.
I have already had a very helpful session with nutritionist Michelle Parsons, herself a triathlete and already I have benefitted from her advice. My diet generally is quite good and my weight and body fat, not that far away from what it was 33 years ago, but she has recommended daily supplements of Creatine monohydrate and Glucosamine and Marine Chondroitin. I have learned the importance of keeping hydrated and of eating well, just after training and racing to help the body recover.

Most of my current competitors I am finding have not taken 33 years off from the sport, some have not stopped racing at all, others have taken a break of some years, but my main competitors have the benefit of a base of several years of training. In talking to them, they say that it has taken 2- 3 years, to get a base of fitness back again, for them to start being competitive. It has made me feel better, in understanding why I am still some way off the pace, but with only 13 months to achieve my goal, I have realised , that I need professional help and all the advantages that can be gained from a more modern science approach. I am in the final negotiations with an experienced coach, who is going to work with me over the next 13 months, to make sure I leave no stone unturned, in my quest to reach my goal. More will follow on this.

Since I last wrote, I have had 2 more races. On the 12 November, I raced down in Southampton, meeting up again with old friends and cyclo cross rival Ian and Drew MacDonald. It had been my birthday the day before and had been down in London that day  to see England and Argentina at Twickenham, so it was only a short drive down the M3 the next morning. In muddy conditions, I didn't feel in the best of form and with a bad starting position on the grid , I was then badly hindered by a fallen rider and was well down the field after only half a lap. I learned 2 important things from the race, firstly I need to get myself nearer the front of the grid in future races. You cannot give the top guys a 30-45 second start on the first lap. the second thing was I need better bike cleaning equipment for the pits! A bike change every lap was required and getting the bike cleaned without proper equipment, is very difficult. I have now invested in a new jet washer, so no excuses for my next race!

Ironically, my next race in Leicester last Sunday, was in perfect conditions and no bike changes were necessary. On a beautiful sunny day, I was given the honour of a front row position on the grid ( I am a Leicestershire lad of course) and it was great to be given such a welcome . A special thanks to Dean Barnett, for helping me in the pits there.

I was on Tim Gould's wheel for much of the first lap and for the first time, felt some sort of form. I do still lack the power, from lack of a base of training, but I set my self  a good pace  and ended up 6th.

Next stop will be a West Midlands league race in Bromsgrove, but before then there is a good week of training ahead !   That's all for now. 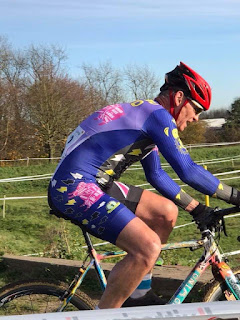 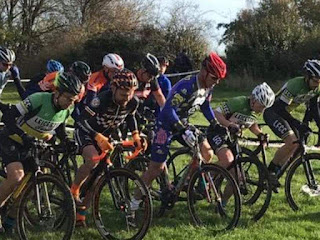