I rode my first competitive cyclo cross race yesterday in 33 years ago and to be frank it was a shock to the system.

I rode the under 50's race in the Shelsley Walsh event, part of the West Midlands league.

in a field of about 50 riders, I came about 20th (still not found out exact result) but I had forgotten how hard the sport is. The course was a tough one (even the current riders, who ride regularly admitted this) so not a perfect start to my comeback. The terrain was pretty relentless and I was pleased when it was all over!

I had not expected great things, as my preparation had been Ok, but due to travel commitments the week before, I had only managed 2 bike sessions in the week before the event. One of those on the Friday, was curtailed when I had a double blow out, when out on the Malvern Hills   (never happened to me before), which resulted in a 3 mile run back to the car, with the bike on my back! Blistered feet from the new shoes was one of the rewards for that.

I am  not deterred, but realise there is much work to be done and that I am going to have to sharpen up my approach if I am to achieve my goals.

My back suffered too on the hilly course, which is a concern, so will need to continue the training regime to strengthen my back.
Next race 8th October in Bristol! 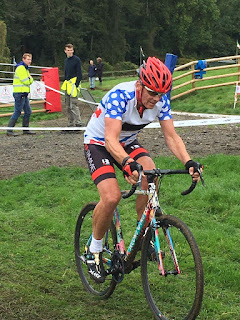